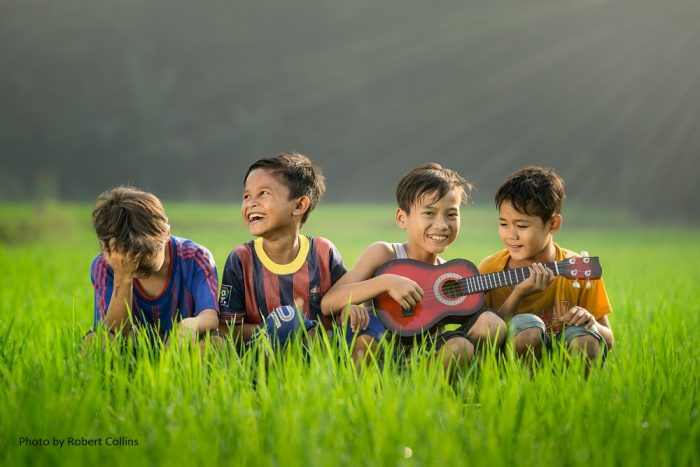 It depends on what you’re comparing. If you’re comparing the actual colour of the grass, you’re definitely going to find places that have greener grass than where you are. It’s practically guaranteed.

Just like if you’re trying to find someone who’s a faster runner than you, or more slender, or ‘richer’, or even ‘prettier’…they’re also practically guaranteed.

We’ll always be able to find someone who happens to be any one of those highly emotive things. If we focus on them.

The rain falls in the west

We’re always going to find grass that’s greener somewhere else. Literally, it’s greener in Wales than it is in East Anglia. Because generally speaking the rain falls in the west and is all cried out by the time the weather hits the east.

But conversely, it’s sunnier in the east!

It depends on what you’re comparing…

So what really matters? How green the grass is over there…or how plentiful is the ground right underneath our own feet? How fast you are compared to your best running buddy…or how much better you feel since you starting running?

What should we really be comparing?

Nothing, arguably. Other than the progress that we’re making in our own right.

Because the minute that we look to compare ourselves against another’s journey, we’re guaranteed to look at some aspect that we’re less-than-happy-with in ourselves…and we’re categorically setting ourselves up to find a disappointment there!

The ins and outs of it

She may be faster on the track than you…but maybe you’re an ace at another skill altogether (I don’t know – maybe you pick up languages like a native, for example?!) She may be shedding the pounds from running, whereas you may have ‘plateaued’…but maybe you’ve got the super-supportive honey-from-heaven back at home instead? Maybe she seems to have all the confidence in the world…but maybe underneath the bravado, she’s secretly hiding a deep unhappy secret?

It’s probable that you don’t know… It’s possible that she’s spying with the green eyes of envy over some other feature – your nose or your sense of style perhaps!? – or lovely character trait that you have…

We just don’t know the ins and outs of someone else’s story, and this is why playing the comparison game can be a monumental waste of energy.

Suggesting that we ought not to compare ourselves is, however, ridiculous – our egos crave the attention! And in addition, a little kick up the unmentionable, can spur us into action…!!

The wellspring of accomplishment

So, choose your comparisons carefully. And make sure that you spin it on its head and glean a positive motivation from it. Or make it a game – when you find yourself comparing yourself, with the potential to head down an ever-depressing spiral, stop and change the parameters. Focus on one of your fortes…something that you do effortlessly well, or easily.

Or better still seek the comparison with your yesterday’s self, or last week’s, or last year’s… Seek to keep improving in your own way, and acknowledging your own progress, and  you’ll always be able to fill up the well-spring of accomplishment with your own achievements.

When we’re all on vastly different routes through our human experience, there’s never a level playing field on which to compare ourselves to others.

Even if it is a green one…