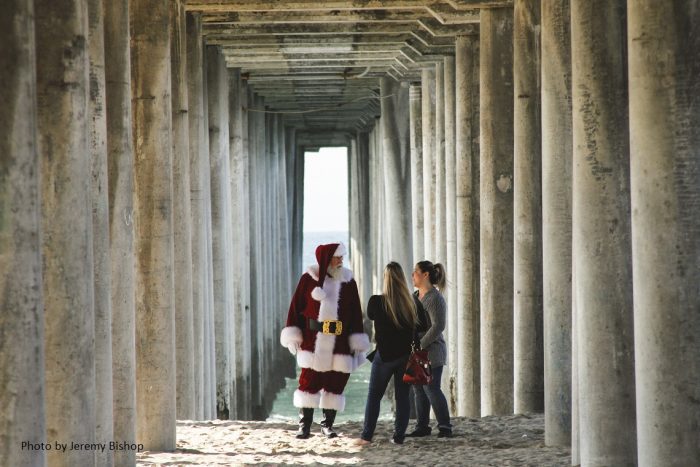 Some believe in medication and invasive medical procedures, some prefer to believe in the body’s internal healing power. (But most of us register that the placebo – the overarching power of the mind – determines the outcome of them both.)

Some believe in fairies…and others know that they’re real! ; )

The point is that we all have a framework – a model – of how we believe that the world (and everything within and without) it works.

Sometimes we’re really ok about changing our model – the Father Christmas concept, for example. We actually release that belief fairly easily (give or take a possible tear or two) when we’re about yay-high.

But if you think about it for a moment – this is world-changing at, say, 8! Your entire world construct is unturned in the click of a fingers – that Father Christmas is, gasp, made up! (And then of course, there’s the ‘adults don’t always tell the ‘truth’ concept too…) And yet doesn’t this simply demonstrate the fabulous capacity that we have as children to easily let go of an idea, and replace it with another one…?

(Perhaps we ought to take more notice of the ‘adults don’t always tell the whole truth’ notion a little more…it may free us in later life from some other skewed beliefs that we hold on to, as well!?)

How flexible are your beliefs?!

Other beliefs we find more difficult to let go of… In fact, we can hold on to them like stubborn old brutes, and can offer up a brick wall’s worth of resistance if they’re questioned or, heaven forbid, someone offers an alternative suggestion… (As if it’s a personal slight that someone believes something different to us! And haven’t we’ve all done that…?)

Our stubbornness is entrenched over time – we get older and we no longer have the flexibility of mind that we had as children.

Oh funny that. (Hint, they are one and the same manifestation – but let’s leave that for another day…)

It’s all a matter of perception

Here’s the thing – each and every one of our beliefs is simply a matter of perception. We choose which models we wish to hold on to. Take the seasonal Father Christmas idea again. We believe (actually we’re conditioned to believe – which forms the initial basis of all of our beliefs if you investigate them, but I digress..), we believe ‘in’ Father Christmas as a real chap who visits with the exact wonderful gifts that we desire… Until we no longer believe in the chap (because it was a lie), and yet we may (or may not, depending on the naughty-status) receive the same wonderful, desired gifts. We’ve just changed our perception of how it all unfolded – ‘oh, it was Mum & Dad!’

(But what a magical belief though…the idea that anything we would wish for with all of our might, and dream about night and day, and ‘work towards’ diligently by being the best person that we possibly be…and that these things will actually be delivered to us! Well, it turns out that it’s not so far from the truth – and not just at Christmas too, but, and I qualify, this is a part of my belief system…)

We changed our Father Christmas model, and no one batted an eye-lid that we did that. In some ways it’s a shame that we rejected the ‘magical’ element of it all… But then again, some come back to the magic in later life…

It’s ok to change our perception

But, alas, it’s just our perception!

Time shifts depending on whether you’re engaged with your activity, or whether your ‘pushing on through’ with a task that you neither enjoy, nor are naturally inclined towards.

(The idea that time is linear is almost as fabricated as Father Christmas, by the way! The clock may be rigid, but time isn’t…!)

Isn’t it all in how we perceive concepts…?

It’s very very healthy to be objective about our perception! In fact it’s a forerunner to accepting that we can change it…

And it’s ok to change our perception!

If we acknowledge that our perception alters in the above examples, then we can start to allow in a change in our belief systems; things no longer seem set in stone.

If your goal for the New Year is, for example, to run your first marathon, or to shed a stone or even two; you will not get there unless, and until, you believe that you can.

Which of course, you can!

You have to believe that something is possible, before you can allow it happen. The ‘new you’ cannot emerge if you’re dealing with an old set of beliefs!

The belief shift comes first and then the outcome. Every time. (With a little bit of applied work, that is!)

The other outcome to changing our beliefs

Sometimes when we change our previous model of the world to a new, different kind of belief system, we sometimes find a huge amount of resistance – from other people!

This is because their deeply-seated beliefs will be challenged…and sometimes when one idea is interrupted, then the entire set-up that we’ve built our lives upon can come into question…

Some people simply don’t feel able to ‘go there’ to change their engrained beliefs.

It takes courage and hard work, and it can be pretty scary to work through what is and isn’t any longer ‘true’.

That goes for you first, on your path, and with your goals and resolutions. And then it’s goes for them, if they so choose to make a change themselves.

So if you’re looking to change something in your life with your New Year’s resolutions, maybe start with your current belief system; what’s working for you and what’s not… and what needs amending?

There’s no need to throw the baby out with the bathwater though…maybe there simply needs a little perception change?!

And then anything’s possible… : )