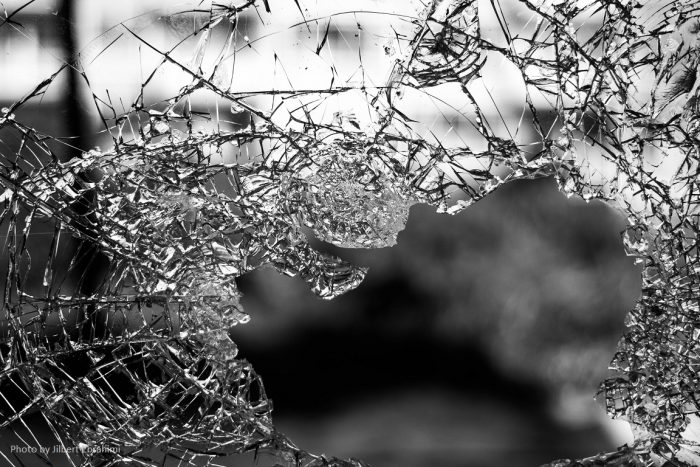 Have you ever had the proverbial rug pulled from underneath your feet? And I mean, wholly and categorically whipped from under you? When something happens and you end up feeling totally and utterly emotionally depleted and all-round empty, and well, in a heap on the floor?

Like, when you discover you’ve been cheated on – you know that kind of life-changing event – and I’m sure an episode of your own comes to mind…

I have two major ones in my life, but more about those later.

An energetic blow to the head

This is what happens to us when these kind of events (hopefully, very rarely) occur:

Firstly there’s usually some kind of mental interaction – an assault, for want of a less-physical word. This is usually when words are spoken, or an event unfold in front of our eyes, or ears and to begin with we can’t make sense of it, completely. We meet confusion initially. Or perhaps even chaos.

And we meet this on the intellectual level. It can feel like confused chaos because there’s a maelstrom of unexpected information which doesn’t make sense to us, logically.

The logical brain scrambles around to try to find out the ‘true’ series of events, and to understand the surprise scenario.

And we get a blow to the head.

Not literal, I certainly hope, but metaphorically – energetically – and that’s why I used the term ‘assault’.

But what really happens is then this: once this energetic blow (that leaves us spinning around in a slightly vacant confusion), has a moment to settle, the impact of it then attaches itself to our heart-energy…

A dagger in the heart

And when we’ve been attacked on the emotional level, and in the energy of the heart, it can feel like we’ve just been stabbed by a dagger right through the (slight left of the) centre of our chest.

Right into that heart space.

And you can almost see how that looks to a person physically – a hand up to protect the heart, a dropping of the shoulders to protect the wound and a massive disruption of the breath. All physical things.

These all occur when the energy has first been torn apart in our intellectual head space, and then plunders down to rip our heart space wide open.

This may also be where disbelief sets in as the emotional reality of the thing, hits home.

And if you’re a person who’s able to openly express their emotions, the floodgates may well burst as well.

Upper-cut in the guts

But the onslaught doesn’t usually stop there, I’m afraid. During the salty inundation, we then start to leak – or maybe even pour – energy out of our core; our solar plexus.

This is where the sun usually shines…and from where the fire in our belly burns; it’s our core – the core of us.

This energetic whirlwind through our body – which starts at the top, at the head, then moves to our heart and then finally gets us in our very core; in the very core of who we are – in our sense of self and our sense of our personal power.

And that’s why we end up crumpled on the floor in a soggy mess. Not because we’ve lost control of our bladder, but because this tumbling onslaught of energy-leaching knocks the stuffing out of us.

It renders us feeling utterly hopeless and completely powerless. Doubled over from the upper-cut in the guts…literally folded over in the middle, and with no strength left in our body to even keep ourselves upright.

Again, a physical reaction to a purely energetic incident. (Have I ever mentioned how the two are intrinsically linked…?!)

Oh dear, my apologies – I hope that I haven’t left you feeling a depleted mess as well, reliving your life-changing clash.

So let me share with you the steps to rebuild yourself back up out of that shell, and once more into a thriving version of yourself, post-incident.

You have to start from the bottom up.

The thing  – the incident – has torn you apart from the top down, and the only way to build that energy back up is to start from the base.

Which means; don’t overthink it at this stage. Because that will drive you bananas! (No doubt, you already know this firsthand; how do you think I know this?!?! But it’s easier said that done at times…)

You can’t approach this healing from the head. We’ve got to start where was it torn apart last; to rebuild from the foundations.

You have to work on your physical centre – your personal power. So do something physically engaging – go for a run! Or something. Get that core in action to revitalise it. (Warning, you may end up in a tearful state in the process – but good! Let those emotions flow!!! They’ve got to come out of your being, so allow them. Emotions aren’t designed for storage – they do disastrous things when we keep them bottled up…like end up as illness. But that story’s for another day.) And for sure, this might not be your immediate thought…but when you’re ready to heal, know that it starts at the core.

Get physical – allow any anger or upset or sadness to leave you; you know you’ll feel better – and work on your physical energy. Not thinking, in this case doing. Summon the physical strength, and the healing will start…

The next step, however, is to heal the broken heart energy. (Letting ‘time’ do its job does not equate to taking personal responsibility here either, by the way.)

When we focus on our heart energy, we connect to both joy and pain – the happy and sad spectrum. After a personal tragedy, we have to release the sadness inside…releasing this is imperative (as I suggest above). Letting go is tantamount a process of grieving. Again it’s likely that this will not happen straight away. Perhaps this is where the ‘time’s a healer’ comes from.

To do this we have to get very still, and quiet. Because when we’re busy talking talking talking it all out with all and sundry, we lose an opportunity to allow the heart energy to find its strength again. To find its ‘voice’, even…

Is it almost inevitable that this part of the process will require some forgiveness to occur. Forgiving any other party in the episode, as well as forgiving yourself for the role that you played. (No one gets into any pickle without having played some part in it… The shock of it all comes because we just didn’t see it beforehand. And we grow when we can see clearly, and change whatever led to the episode…).

It will speak to you from within.

Because this is where decisions are made – from in our body, from our heart…(not in our head).

Your intellect will have come back into its own and will be able to act on the decision. And what’s more, the whole body will energetically be behind it, and connected to it. And able to act and make a much faster progress.

I’m not suggesting it’s a quick fix by the way – the time’s a healer idea again. But it’s more likely that we get stuck on the forgiveness part, and that this is what stalls us. Because it’s highly likely that you may end up going through the energy rebuilding process several times before you feel wholly and energetically complete.

Broken goods? There’s no place for a throw-away society

As for those two knock-you-sideways events of my own? Well, the memories have faded. There’s been a lot of learning and growing and forgiving that has gone on in order for that to happen, But in truth they are both still memories, and just occasionally they rear their now-less-ugly heads. Either when I’m meeting another, but different, challenge in my current life or maybe just to remind me how much I’ve grown since those incidents.

It’s what it’s all about in any case, isn’t it? Not berating ourselves for the ‘what happened’ and declaring that we’re flawed and a bad person….but more, it’s about experiencing these things so that we can embrace the opportunity that’s presenting itself, and to grow…

Either that, or throwing out that rug and getting a sparkly new carpet fitted…but you know it won’t look half as nice as that rug you’ve just mended and got nicely laid out again; it’s what gives it its character.

And anyway, it’s about being sustainable, isn’t it?!